The group has crafted a programme unique to Kosmos, inspired by music from all around the globe, to suit the occasion.

The following is a brief background to some of the musical traditions that inspired tonight’s programme:

Greece bridges the West and the Orient and its music spans millennia of history. Greek traditional music has origins traced to Greek antiquity, both in its folk and Byzantine origin manifestations. Byzantine music also included a rich liturgical chanting tradition with strong influences in later music – the inflections, expression and modal nature of much of the music are connected to Byzantine chant. There is a huge variety of Greek music. Every island and region has its own specific style, tradition, instrumentation and folk songs. Kosmos is particularly interested in the influence of music brought by Asia Minor Greek refugees from Turkey around the time of a traumatic population exchange in 1922. This music, in which the fiddle played an important role, fused with the Rembetika tradition of mainland Greece and significantly influenced it. Its themes included, love, the pain of being torn from your country, death and, being mainly the music of abject people in urban centres, prison and drugs. This branch became the urban blues of Pireaus and Thessaloniki’s impoverished subculture, snubbed by the middle classes and suppressed by the authorities. Later the Rembetika, making much more use of the bouzouki (Greek lute), as championed by musicians like Markos Vamvakaris, evolved into a genre of music which sounds more Western and less modal.

The stunning plurality of musical styles in present day Turkey includes Ottoman Art music, folk, Arabesque , Anatolian Rock and Turkish pop, as well as folk traditions played by Greeks, Armenians, Kurds, and Alevis. Ottoman Art music in particular has its roots in the Byzantine and Persian traditions and, partly due to the size of the Ottoman empire at its peak, has had a profound influence on music in the Middle East and North Africa creating a striking overlapping repertoire. The traditional music is based on a modal system of makams (similar in concept to Indian ragas) which, are explored through improvisation as an introduction (taksim) or during a song or piece of music.

More correctly known as the Roma people, one of the best-known nomadic groups in the world, appearing in literature and folklore, they are historically often referred to as “Gypsies”- a term that is based on a mistaken belief of an origin in Egypt. The Roma people are  believed originally to have come from Rajasthan in India, and travelled to many corners of the world including Spain where they are famous for flamenco music and dance, France where they are associated with manouche (“Gypsy- jazz”), and in the Balkans and Russia, where they are also known and celebrated for their musical talents, traditionally performing music in restaurants, taverns and at weddings. Composers such as Brahms, Sarasate, Dvorak, Bartok, Liszt, Ravel and Enescu were profoundly inspired by Gypsy melodies and virtuosity. Likewise, Kosmos draws on traditional Gypsy music especially that of Europe and Russia, finding parallels with Western classical music and recomposing it for a twenty first century ensemble.

The Jewish diaspora has resulted in a huge wealth of Jewish music. There are two main strands of traditional Jewish music in Europe and the Balkans, and both are of interest to kosmos.

A sensuous, rhythmic and passionate dance music from Argentina, tango - originally a dance for two men - has come to epitomize the glamour and elegance of high society, with women in sleek glittering evening gowns and men in tuxedos. However, it originated in Argentine society's underbelly, and then the brothels. As immigrants from Europe and Africa, streamed into the outskirts of Buenos Aires during the 1880s, many found themselves working in the houses of ill-repute. The dance became a highly theatrical representation of the relationship between the prostitute and her pimp, accounting for its daring combination of sleaze and elegance. Since the 1880s the genre has grown in 'respectability' and  tango has developed into one of the most popular dances in the world, with famous tangos composed from Poland to Turkey. Its freedom and flexibility, its passion and drama, are a constant source of inspiration for Kosmos. The best-known tango composer today is Ástor Piazzolla (1921 -1992) – he borrowed from and revolutionised the traditional Argentine tango, creating a new style termed tango nuevo, incorporating elements from jazz and classical music. Kosmos has experimented with taking this one step further, incorporating melodies from Jewish and Greek Island music.

As well as adopting western classical music, and enjoying a thriving popular music culture, Japans boasts a rich tapestry of traditional genres and distinct styles from traditional Buddhist chanting (shōmyō ) and orchestral court music (gagaku ) to  Enka, a vocal genre popular in the 1950s  (derived from music of the late 19th century) evoking romanticized  and idealized Japanese culture: Enka singers, predominantly women, usually perform in a kimono, making use of  the pentatonic scale, vocal Melismas specific to the genre and often, traditional folk songs.  Japanese folk songs (min'yō)  include work songs, religious songs (such as Shintoist music), songs used for weddings, funerals, and festivals (matsuri, especially Obon), and children's songs (warabe uta).  Sakura (Cherry Blossom) is an example of a popular Japanese folk song and depicts spring, the season of cherry blossoms. Originally an urban melody of the Edo period (1603 -1868) made especially popular during the Meiji period (1868-1912) it is now often sung in international settings as a song representative of Japan.  The melody is pentatonic using scale degrees 1, 3, 4, 6, and 7 (C, E, F, A, B).  In min'yō, singers are typically accompanied by the three-stringed lute known as the shamisen, taiko drums, and a bamboo flute called shakuhachi. Other instruments that could accompany are a transverse flute known as the shinobue, a bell known as kane, a hand drum of Chinese/Indian origin called the tsuzumi (specific to Okinawa), and/or  the Koto, a 13-stringed zither. Kosmos’s arrangement of this song explores the sound world of Japanese instruments and nature. 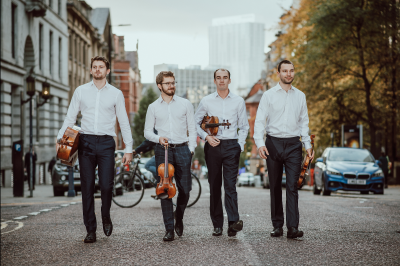 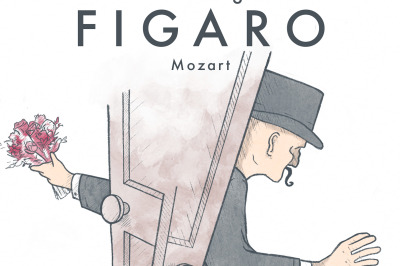 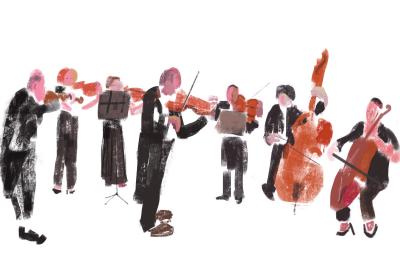